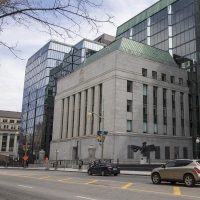 The Bank of Canada today maintained its target for the overnight rate at ¼ percent, which the Bank considers its effective lower bound. The Bank Rate is correspondingly ½ percent and the deposit rate is ¼ percent. The Bank also announced new measures to provide additional support to Canada’s financial system.

The necessary efforts to contain the COVID-19 pandemic have caused a sudden and deep contraction in economic activity and employment worldwide. In financial markets, this has driven a flight to safety and a sharp repricing of a wide range of assets. It has also pushed down prices for commodities, especially oil. In this environment, the Canadian dollar has depreciated since January, although by less than many other currencies. The sudden halt in global activity will be followed by regional recoveries at different times, depending on the duration and severity of the outbreak in each region. This means that the global economic recovery, when it comes, could be protracted and uneven.

The Canadian economy was in a solid position ahead of the COVID-19 outbreak, but has since been hit by widespread shutdowns and lower oil prices. One early measure of the extent of the damage was an unprecedented drop in employment in March, with more than one million jobs lost across Canada. Many more workers reported shorter hours, and by early April some six million Canadians had applied for the Canada Emergency Response Benefit.

Read the Complete Press Release from Bank of Canada